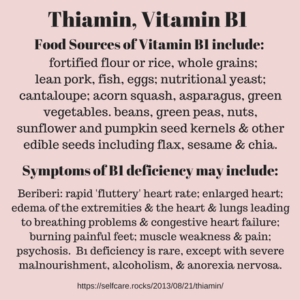 Food Sources of Thiamin (vitamin B1) include:

Thiamin or vitamin B1 may have been the first vitamin to be discovered.

Thiamin is also known as vitamin B1. Historically it may have been the first vitamin to be discovered.  Around 2600 BC the symptoms of thiamin deficiency were described in Chinese literature.  Thiamin deficiency, or beriberi as it was commonly called, became a more frequent problem in some communities when white flour and polished rice were first introduced.  Milling brown rice removes thiamin from the grain along with the fibrous outer layer of the grains of rice.

Symptoms of beriberi, vitamin B1/Thiamin deficiency, can include:

Deficiency of Thiamin is rare except with severe malnourishment or increased needs:

Chronic alcoholics and anorexic or other malnourished people are more at risk for thiamin deficiency.  Malaria and HIV may increase need for thiamin due to the infected cell’s increased use of the nutrient.  Renal patients on dialysis may need extra thiamin due to increased loss. The nutrient is fairly widely available and deficiencies are not typically found in people of average health with reasonably varied diets.